Adrian Stefanescu has been with the Harrisburg Symphony since 2007.  Previously, he was the principal percussionist of the Hong Kong Philharmonic Orchestra from 2003 to 2007.  He also performed with such orchestras as the Seattle Symphony, The Chamber Orchestra of The National Radio Station Bucharest and the Delaware Symphony.

Mr. Stefanescu toured Europe with the Philadelphia Orchestra and he can be regularly seen performing with them at the Kimmel Center in Philadelphia, the Mann center and at their summer residence in Saratoga New York.
Mr. Stefanescu performed with such artists as Luciano Pavarotti, José Carreras, Renée Fleming, Charlotte Church, Joshua Bell, Yo-yo Ma, Lang Lang, Sarah Chang and others.

In 2006 he was the featured soloist in the Asian premiere of the Chen Yi Concerto for Percussion and Orchestra.
An active chamber musician in Romania, he appeared at The Romanian Athenaeum and The National Radio Symphony Hall, performing Bartok’s Sonata for two Pianos and Percussion. A founding member of the Game Percussion Ensemble, Mr. Stefanescu has premiered many solo and chamber works by many noted Romanian composers, such as Maia Ciobanu, Liviu Danceanu, Doina Rotaru and Serban Nichifor.

He was a featured soloist at the 1998 Festival of New Music in Bucharest, the 1997 Contemporary Music Festival in Bacau and the George Enescu International Festival.

Awarded First Prize at the inaugural National Contest for Percussion in 1998 in Bucharest, Mr. Stefanescu also won the Percussion Mock Audition at the Percussive Arts Society International Convention in Nashville (2001), and was a Finalist of the Orpheus Prijs Contemporary Music Contest in Antwerp – Belgium (1997).

Stefanescu’s music studies began at the age of six. Upon graduation from The George Enescu Music Lyceum, he was admitted to The Ciprian Porumbescu Music University of Bucharest with the highest score. There he studied with Alexandru Matei, – previously a percussionist with The National Opera of Bucharest.  Adrian Stefanescu received his Bachelor’s Degree in 1998 at the top of his class.

He also holds a Master’s Degree in orchestral performance from Temple University in Philadelphia, where he studied with Alan Abel, Philadelphia Orchestra’s former Associate Principal Percussion.

In addition to his life in the orchestra, Stefanescu was very involved in the jazz music scene in Romania. As a jazz drummer, he performed extensively with top Romanian musicians such as Johnny Raducanu, Garbis Dedeian, and Mircea Tiberian. He recorded in the studio, performed on Romanian national television and appeared at many international jazz festivals throughout Romania, Greece, Spain, Poland and Bulgaria. 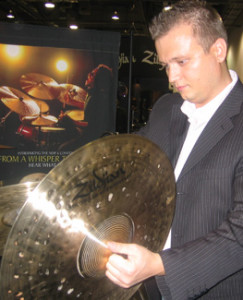 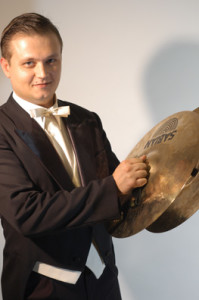