Igor Zubkovsky started playing cello at the Gnessin Music School in Moscow and first appeared as a soloist with the Minsk State Philharmonic Orchestra at the age of twelve, performing Haydn C Major Cello Concerto.

In 1994, Zubkovsky graduated from the Moscow Tchaikovsky Conservatory where he studied cello with Natalia Shakhovskaya, the First Prize Winner and a Gold Medalist of the 1962 Tchaikovsky Competition, and chamber music with Alexander Bonduriansky. He then went on to earn a postgraduate degree which he completed in 1997.

With a remarkable record of performances, awards and academic distinctions, he was awarded a full scholarship to the Peabody Conservatory of Music in Baltimore, Maryland where in 1999 he earned a Graduate Performance Diploma.

He has appeared at the Merkin Concert Hall in New York, the Kennedy Center in Washington, DC, Bolshoi and Maly Hall of the Moscow Conservatory, the Belgrade Philharmonic Hall, the Hall of Columns of the Moscow Palace of Unions, National Gallery of Art, Corcoran Gallery of Art and Department of State in Washington, D.C.. As a chamber musician, he also participated at the Schwetzingen Festival, Kuhmo Chamber Music Festival, Newport Music Festival and Lancaster Festival. 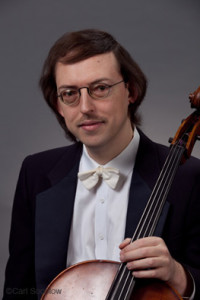 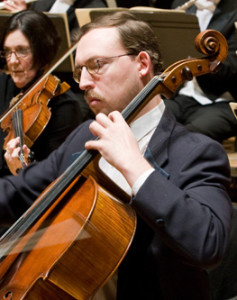